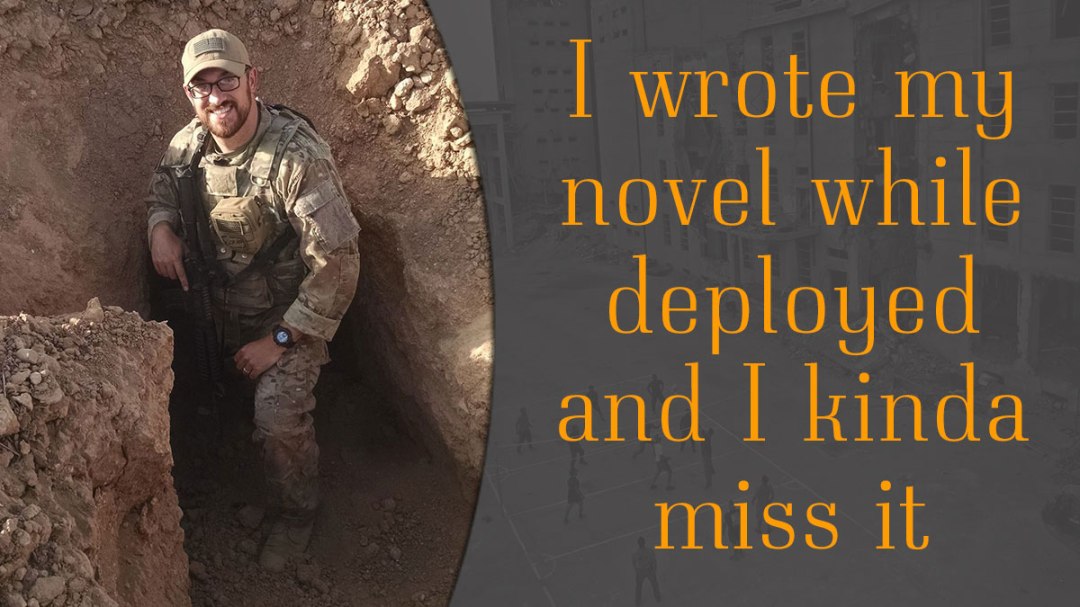 I wrote my novel while deployed and I kinda miss it

In 2018, I was hand-picked by my U.S. Army Reserve battalion to deploy overseas in support of the Special Operations Joint Task Force — Operation Inherent Resolve. This is the coalition of countries responsible for assisting local partner forces to eliminate ISIS. Our unit was responsible for providing photo, video, and media support for Kuwait, Iraq, and Syria.

Once we arrived at Camp Arifjan, Kuwait, the unit was divided into different areas of operation. Many stayed in Kuwait to provide analysis in the joint operations center, a few were sent to Iraq to provide coverage of partner force training, and I was sent to Syria — the front line of the ongoing war — with one other soldier.

In Syria, we split up again. My counterpart remained in the task force headquarters and I traveled throughout the country like a military nomad to embed with various Special Forces, Civil Affairs, and Psychological Operations troops. I took photos of everything from rebuilding hospitals and basic infrastructure to the mortarmen and artillery troops providing indirect fire for the Syrian Democratic Forces as they liberated ISIS-controlled towns and villages.

It was a unique experience for me in my military career. For six months, no one from the chain-of-command checked in on me (which, looking back on it was really fucked up considering I was the only one in the unit on the front line of the war). I didn’t mind, though. In fact, it was the best thing to happen to me.

Special Operations is different from the conventional army. Rather than being sticklers for proper military etiquette — saluting officers, standing at parade rest, etc. — these soldiers did something that would probably cause most sergeants major to bust a blood vessel, they treated everyone as an adult. It was easy, really: do your job, don’t be an idiot, and carry your weight.

So, how does all this work into my writing? Well, before I left the United States, I had an idea: I was working on building a parenting blog for fathers and decided to include a special section called Deployed Dad, where I would chronicle what it was like to be a father downrange.

Unfortunately, Syria, being an austere battleground, didn’t have the blazing high-speed internet connection to support this endeavor (seriously, in some places it would take days to download an ebook on my Kindle).

So, rather than trying to fight that fruitless effort, I decided to switch gears and work on another project I’d shelved more times than I can remember: writing my novel.

Until this deployment, my writing career had been something of a flimsy pipedream. I’d always been a storyteller; I loved creating epic fables about mystical creatures or exciting adventures about traveling through space. But I didn’t get serious about writing until my freshman year of high school.

In English class, we were given the assignment to write a five-page mythological story. While my classmates created typical parody stories, like the Adventures of Viagra-Man, I ended up penning a fifteen-page companion story to the Odyssey which told the tale of Odysseus’ best friend Jax, who set sail in search of his king when his fleet didn’t return home from Troy.

It was because of this, (as well as many other subsequent stories and the fact I hate doing math — another story for another day, perhaps) that I decided I wanted to be a writer. Unfortunately, after I finished college in 2009, the U.S. was in the middle of an economic depression and jobs for English majors were slim.

Looking back on it, I wish I could’ve used this newfound free time to focus on my writing, but I guess the fear of not knowing how to pay my bills, covered with a healthy coat of self-doubt and imposter syndrome, was enough to force me to shelf every project I ever tried to start.

So, anyway, there I was: basically alone in a foreign land, no internet, and the only other tangible forms of entertainment revolved around exercising or locking myself in a bathroom stall for as long as my imagination would hold out. As tempting as indulging in these simple pleasures sounds, I decided to use what free time I had to cozy up on whatever bunk, litter, or ground real estate I could claim and dig into my writing.

Working on my book turned into a great way to decompress from a long day of convoys and patrols. And, without the distractions of worrying about my family, maintaining a house, or leading subordinate soldiers, I was able to devote as much time as I wanted to my craft. In the nine months I was deployed, I finished The Probability of Time and about half of the sequel.

It may sound weird, but being in a warzone allowed me the time to actually finish the first draft of my novel and stave off the self-doubt I had about my abilities. Once I was able to type the end, I knew the dream I had of becoming a writer was possible.

It’s been more than two years since I’ve returned home. That first year back, I dedicated my writing time to editing and polishing the novel for eventual publication. Now, I have dug back into the writing — working on continuing the draft of the sequel — but time, unfortunately, isn’t something I have an abundance of anymore and the writing process is slower than I want.

I work a fulltime job, I have a beautiful family, and responsibilities to accompany both. With a newborn, sleep is inconsistent. With work (especially during the COVID-19 pandemic), I have been extremely busy. With a preschooler, the house is in a constant state of disarray with a seemingly never-ending stockpile of toys and art projects.

To be clear, I would never willingly give up the time I have to spend with my family. The situation revolving around why I was selected to deploy was a whole ugly situation in itself, but I won’t get into that here. What I will say is being away from my eldest son for almost a year was heartbreaking and the stress on my family was unnecessary.

However, as I sit down every night after the family is fast asleep and I crack open my laptop, I often find myself reminiscing about being over there. Things were simple and I had complete control of myself and my time. Don’t get me wrong, I won’t put my family through that experience again if I can help it. But if I’m being honest, I do kinda miss it.