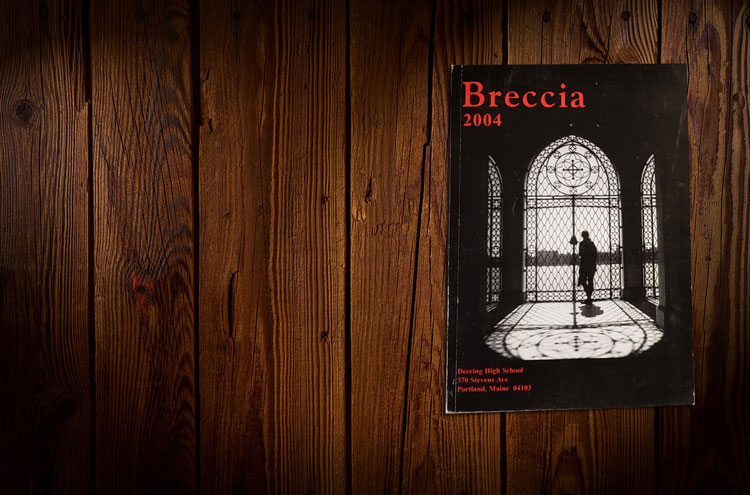 A few weeks ago I shared my story about why I wanted to become a writer. Then, I told you about three rules of writing I learned in college which nearly made me want to give up on writing altogether. Now, I want to share a short – and admittedly awful – story I wrote and had published in our school literary magazine.

Believe it or not, this story actually saved my writing career. I was ready to stop pursuing my dream, but after I found a copy of this story stored in a bin under my childhood bed at my parent’s house, it reminded me of the passion I once felt when writing creative fiction.

I copied the story word-for-word from the magazine (including typos and grammatical errors) to share with you. At the end, I’ll explain more about how this story revitalized my passion for storytelling.

The thermometer on my back porch read eighty-five degrees. It was 2:05 in the afternoon one day in June. I had just gotten out of a long day at school. I was bored-much like I had been all that week after school. This afternoon was going to be different. My friends and I came up with a masterful plan only to be known as “Operation Horizontal Rain.” Three cars were parked in front of my house, eight people, ten water guns, and one plan in mind. We chucked as we topped off our tanks and piled into two of the three cars, a jeep and a van. The clock read 2:25; only five more minutes until middle school bells rang and herds of little teen wannabes pranced out of the doors of their weekday cage and tried to take a taste of “freedom.” They were in our pockets.

“Today’s target: Lincoln Middle School,” said one of my friends.

“Lock and Load,” said another as if we were members of a S.W.A.T team and about to make our move.

Our engines revved as the drivers turned their keys and pushed the shifter into first gear. We began to move forth in our operations. We first took flank positions by turning down Woodfords Street. Then right down Columbia Road our first point of contact would be at the rear doors of the middle school. The van took the lead, followed closely by the jeep. One of the kids in the van asked how this was going to work if we go too fast. The immediate response was the hostile zone was also a school zone, meaning the speed limit was fifteen miles-per-hour, which meant that the physics behind the operation, time of day, and the wind factor made the effect of the squirt guns at optimal efficiency.

The contact zone was in sight. Right on cue the targets left joyously from their humble safe haven. There they stood, soliciting in the rear of parking lot talking about the boy in their math class, the big game this afternoon, and about the latest fashion to hit Fifth Avenue.

“like shooting fish in a barrel,” stated the driver of the van, who will be code named “Nathan Cory.” We all laughed as we oped the sliding door and took aim. We made our pass. Shrieks of surprise were soon overcome by words of hate; these words too were short lived as shrieks filled the air as our second vehicle made its pass. Again, the surprise was overcome by hate. We laughed and yelled out a few “hoorahs” and “oh yeahs.” We settled down as we took another turn and headed toward Steven Avenue. Our mission was merely half over. The front entrance to the school had still been unscathed from our siege, not for long.

There they stood unaware of what was about to happen to them. Frantically, we pumped pressure into our water guns. The reactions were the same in the front as they were in the back; we laughed. However, this group of pre-teens was more hostile than the others; they threw soda bottles and profane language towards us, each of which followed by the one finger salute.

“I know I’m number one!” yelled one of my friends from the tailing jeep.

No one could get over how much fun this trek was. Many of us still had half full or half empty tanks and decided to discharge them in the only logical means possible, more preteens. We made another pass to take down any survivors. The second trip around was just as satisfying as the first. However, this trip included a special bonus. We noticed an annoying group of underclassmen; for safety sake they will be code named the “tool box.” They were stooped just outside the Deering auditorium. We calmly drove onto the lawn towards them, discretely as had done so many times before, dropping items off to the drama club. We drove by and opened the sliding door and like cockroaches they scrambled. Out mission was complete.

That day was fun, but it also showed the lengths teenagers go to in order to entertain themselves. It was towards the end of the school year, and we decided to make the incoming freshen understand their place in the hierarchy of society – high school. Many of the victims of that day will probably never remember the events that took place, or even who did it. However, subconsciously they will carry it with them for some strange reason that they cannot comprehend until they become heirs to the throne. They will never question the supremacy of a senior.

How did this story help me – more than a decade after I wrote it?

So, how much did you cringe reading it? It’s okay, I did too. At the time I thought this was a brilliant piece of prose. But reading it now I see spelling errors, grammar mistakes, its flow is ragged at times, and unless you’re from Portland, Maine you probably have no idea what any of these places are.

So you might be thinking, “Tim, this story sucked, how did this flaming pile of garbage help you?” (Did I mention I am my own worst critic?)

If you haven’t read my blog about the three rules of writing which nearly broke me, then you should, because it’ll help you understand the mindset I was in when I found this story after nearly a decade.

If you don’t want to read it (you can’t see it but I’m frowning right now), I’ll summarize: I was in a terrible place with my writing. It was so bad I couldn’t even convince myself to open Microsoft Word on my computer; I’d buy notebooks to help me jot down ideas and write outlines and, well, I’m pretty sure they’re still empty.

I was eighteen when I wrote “Operation Horizontal Rain” and at the time I didn’t care about the “rules” of writing; hell, I probably didn’t even know them. I didn’t create outlines, everything was written by stream of consciousness. But none of that mattered, I felt a rush of adrenaline when my mind and fingers worked in unison to bring the stories rambling through my head to life.

But after college, that all changed. I was too worried about trying to create the perfect piece of prose that all the magic I felt when writing was gone, replaced by the same abhorrent feeling I’d get when faced with adult chores I despise – like folding laundry, I don’t trust people who like to fold laundry …

I was ready to give up. I doubted myself and my ability to write and tell stories. I convinced myself I’d never get published and worse of all, I became satisfied with the idea that I’d never create anything to help inspire others – which was why I wanted to become a writer in the first place.

Then I found my copy of Breccia tucked away under my bed and read my story. I remember my smile stretched across my face so far it hurt. Yes, it’s an awful story but as my eyes scrolled across the page, not only did the memories of that day dance around my mind, so did the passion and energy I remember having the day I wrote it.

It was that day I told myself, “fuck the rules; I don’t care if my stories don’t fit the cookie cutter for classic literature. I’m going to tell my stories because damn it, they’re fun!”

That was it. That was when everything changed like a switch had been flipped. I started putting my thoughts down on paper again – years of half-developed plots and ideas. Eventually, those began to take shape of an outline. One chapter became two and two became three. Before I knew it, I’d written the first draft of my debut novel, The Historian.

The rest, as they say, is history (pun intended).

I’ve recently tried to become more involved with the online writing community on Facebook and Twitter. One of the reoccurring themes I see, on a daily basis, is the fear of writing – the self-doubt and fear of releasing your story to the world.

I wanted to share this story because I know what these authors are going through. Hopefully, my story will help someone overcome their fears and understand I’m rooting for them to succeed. If this story did help you, I hope you’ll share it with others.

In the wise words of Captain Jason Nesmith: “Never give up. Never surrender.”